The Routing has two main responsibilities: 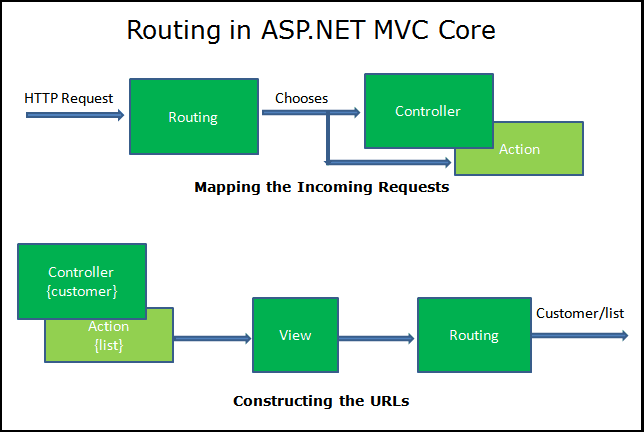 The following diagram shows how the Routing Works in ASP.NET Core apps. 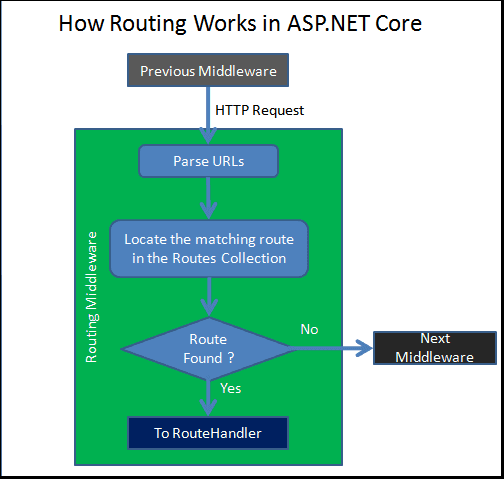 When the Request arrives at the Routing Middleware it does the following.

What is a Route

The Route is similar to a roadmap. We use a roadmap to go to our destination. Similarly, the ASP.NET Core Apps uses the Route to go to the controller action.

The Each Route contains a Name, URL Pattern (Template), Defaults and Constraints. The URL Pattern is compared to the incoming URLs for a match. An example of URL Pattern is {controller=Home}/{action=Index}/{id?}

The Route is defined in the Microsoft.AspNetCore.routing namespace.

What is a Route Collection

The Route Collection is the collection of all the Routes in the Application. An app maintains a single in-memory collection of Routes. The Routes are added to this collection when the application starts. The Routing Module looks for a Route that matches the incoming request URL on each available Route in the Route collection.

The Route  Collection is defined in the namespace Microsoft.AspNetcore.routing.

What is a Route Handler

The Route Handler is the Component that decides what to do with the route.

In the ASP.NET Core, the Routes are handled the MvcRouteHandler.

This is the Default Route Handler for the ASP.NET Core MVC Middleware.

The MVCRouteHandler is registered when we register the MVC Middleware in the Request Pipeline. You can override this and create your own implementation of the Route Handler.

The MVCRouteHandler is responsible for invoking the Controller Factory, which in turn creates the instance of the Controller associated the Route. The Controller then takes over and invokes the Action method to generate the View and Complete the Request.

How to Set up Routes

There are two different ways by which we can set up routes.

The Convention based Routing creates routes based on a series of conventions, defined in the ASP.NET Core Startup.cs file.

Creates routes based on attributes placed on controller actions.

The two routing systems can co-exist in the same system. Let’s first look at Convention-based routing. We will look at the Attribute Based Routing in another tutorial

The Convention based Routes are configured in the Configure method of the Startup class.

The Routing in is handled by the Router Middleware. ASP.NET MVC adds the routing Middleware to the Middleware pipeline when using the app.UseMVC or app.UseMvcWithDefaultRoute.

The app.UseMvc method gets an instance of the RouteBuilder class  The RouteBuilder has an extension method MapRoute which allows us to add Route to the Routes Collection as shown below.

The Routing engine is given a Route to follow using routes.MapRoute API

In the above example, the MapRoute creates a single route, which is named as default and the URL Pattern of the route is {controller=Home}/{action=Index}/{id?}

The Each route must contain a URL pattern. This Pattern is compared to an incoming URL. If the pattern matches the URL, then it is used by the routing system to process that URL.

Each URL Pattern consists of one or more “segments.”  The Segments are delimited by the forward slash character

Each segment can be either a Constant (literal) or Route Parameter.

The Route Parameters are wrapped in curly braces for example {controller}, {action}.

You can also have the Constant segments as shown in this route.  admin/{controller=Home}/{action=Index}/{id?}. Here admin is a Constant and must present in the requested URL.

The ? in {id ?} indicates that it is optional. A question mark ? after the route parameter name defines the parameter as optional

The URL Pattern {controller=Home}/{action=Index}/{id?} Registers route where the first part of the URL is Controller, the second part is the action method to invoke on the controller. The third parameter is an additional data in the name of id. 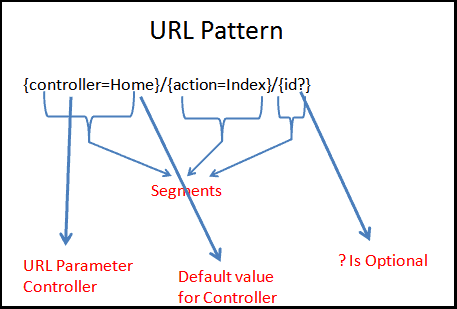 The Each segment in the incoming URL is matched to the corresponding segment in the URL Pattern.The Route {controller=Home}/{action=Index}/{id?}  has three segments. The last one is optional.

Consider the Example URL  www.example.com/product/list. This URL has two segments. This URL Matches with the above pattern as the third segment in the URL Pattern is Optional

The  Routing engine will parse as {controller}= Product & {action}= List 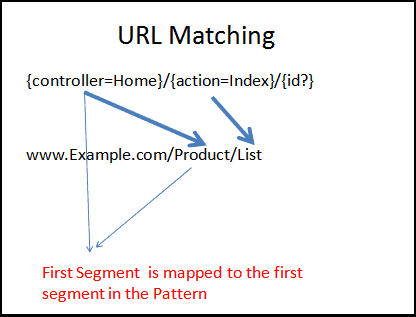 The www.example.com also matches with the above URL Pattern as the first segment controller has the default value of Home. This URL is Parsed as {controller}=Home and {action}=Index

The URL  www.example.com/product/list/10/detail fails. That is because this URL has four segments and the URL Pattern has three.

The Previous versions of the ASP.NET returned a match, even if the Controller Action method did not exist and application returned a 404 error.

The ASP.NET Core routing engine checks of the existence of the Controller & Action method for the each route checked. If there is no corresponding controller and action method in the application then matching will return negative, even if the Route exists.

Lets us build an example ASP.NET Core app to check how the routing works.

Open the startup.cs and add open the ConfigureServices method and register the MVC Services as follows

Now, go to the Configure method in the startup.cs and register the MVC middleware using app.UseMvc.

The app.UseMvc does not register any routes.

The app.Run is a Terminating Middleware, which in the above example displays when “Failed to Find Route”. This Middleware will run only when the app.UseMvc fails to detect any route.

Now, Create a Controllers folder in the project root. Right, Click on the Controller folder, click on Add Controller. Select “MVC – Controller Empty”. Enter the name of the controller as HomeController.

Now. Open the HomeController and change the index method to as follows

You can refer to the tutorial Build your First ASP.NET Core MVC Application on how to create a new asp net core app.

Run this app and try the following URLs.  /,/Home, /Home/Index.

In all the above cases you will receive the “Fails to Find a Route“ message. This is because we have not registered any Route.

Go to the Configure method of the Startup.cs class and change app.UseMvc as follows.

We have not specified any defaults. Hence both the controller and action to be present in the URL.

Now, we have a default value for action URL Parameter.

Now, Add the default for the Controller

The difference between above route and this route is that the admin is now defined as Constant (without curly braces). This means the first segment of the URL must contain the word admin.

Now, Consider the following Route. This is the default Route that gets registered when we use the app.UseMvcWithDefaultRoute.

It has the third segment named id, which is Optional.

The id can be passed as the parameter to the Controller Action method.

Change the Index method of the HomeController as shown below.

A request for /Home/Index/10 will match the above route and the value 10 is passed as id parameter to the Index action.

Route Defaults can be specified in two ways.

The one way is to use the equal sign ({controller=Home}) as shown in the previous examples.

Another way is to use the third argument of the MapRoute method.

In the examples above, we used only one route

You can configure the ASP.NET Core to handle any no of routes as shown below

The example above has two routes. Each route must have a Unique Name. We have named it as secure and default.

The first route is interesting. It has only one segment. We have setup defaults values for controller and action method on this route. The Controller & Action defaults to Index method of the AdminController.

Create an empty AdminController.cs under Controllers folder. Change the Index method as shown below

Now run the app and try out the following URLs.

Order in which routes are registered is very important.

URL Matching starts at the top and enumerates the collection of Routes searching for a match. It stops when it finds the first match.

The first route has URL Parameter {home} and matches everything. The second route has constant  “secure”, which is a more specific route.

When you use the URL “/secure”, it does not invoke the AdminController, but instead the HomeController. This is because the first “Secure” matches the first route.

To make this route work, move the secure route ahead of the Home Route

3 thoughts on “Routing in ASP.NET Core”