What is a Controller

The Controller is the first component to receive the request from the User.  When a user enters a URL into the browser, The ASP.NET Core MVC routing engine maps the request to a specific controller.

For Example, the following request coming from the User

In the above case, the Controller named CustomerController is invoked.  It then invokes the List Action method and generates the response and sends it back to the User.

The Controller has three major responsibilities

The Controller is responsible to Handle Request from the User.

Finally, it should return the Result in HTML/File/Json/XML or whatever the format requested by the user.

Controllers are nothing but regular .NET Classes. By Convention, Controllers Reside in the project’s root-level Controllers folder. 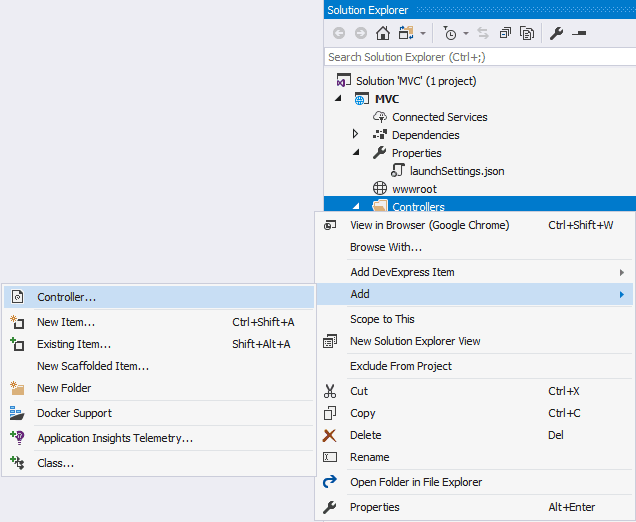 Next,  you are presented with the various scaffolding option. There are two main options here.

Both the MVC and API Controller inherits from the same Controller class and there is not much difference between them, except that API Controller is expected to return the data in serialized to format to the client.

Further, we have three options under both types of controllers.

There is another way to create a Controller. Right Click on Controllers folder and select Add new item and select the MVC Controller in the Template. This will create an Empty Controller.

The Controllers in ASP.NET Core Inherit from Controller class which in turn inherits from the ControllerBaseClass. These two base classes provide several useful helper methods.

Any Public method exposed by a Controller is called an Action method.

The Action method gets called when a user enters a particular URL in the browser.

For Example, http://localhost/Customer/List will invoke the List Action method in the CustomerController.

Action methods should call the service layer to respond to the request.  The Service layer generally should query or update the database using data access layer and then map the results into a model and pass it back to the Action method.

Action method then invokes the View with the model to generate the response.

When Creating an Action method you should remember the following

The Routing Module is an Important part of the ASP.NET Core.  This Module inspects the incoming URLs and invokes the right Controller Actions associated with that request.

For Example, the incoming URL http://localhost/Customer/List first goes through the Routing Module. The Routing Module inspects this URL and chooses the appropriate Controller to handle the request. It then instantiates the Controller and invokes the correct Action method.

We will discuss the Routing in ASP.Net core Tutorial. The Routing could be either Convention based or Attribute based.  The Routes are defined using the convention or as an attribute of the Action method.  The Routing module uses the Routes map the request to the Controller Action. The Routes can be given ActionName attributes to alias the Action Method names. The HTTP Action Verbs can be used to control the Action method based on HTTP request method. Further, we can use Route Constraints to distinguish between Similar looking routes.

The Action methods are responsible for handling use request and generating the response that is ultimately displayed to the end user. The Response could be HTML page, Json, XML or a file to download.

A Controller action can return anything it wants. For example, the following Action method returns a string.

In this tutorial, we introduced you to the some of the basic concepts of ASP.NET Core  MVC controllers, controller actions, and controller action results. In the next few article, we will inspect each of those in detail